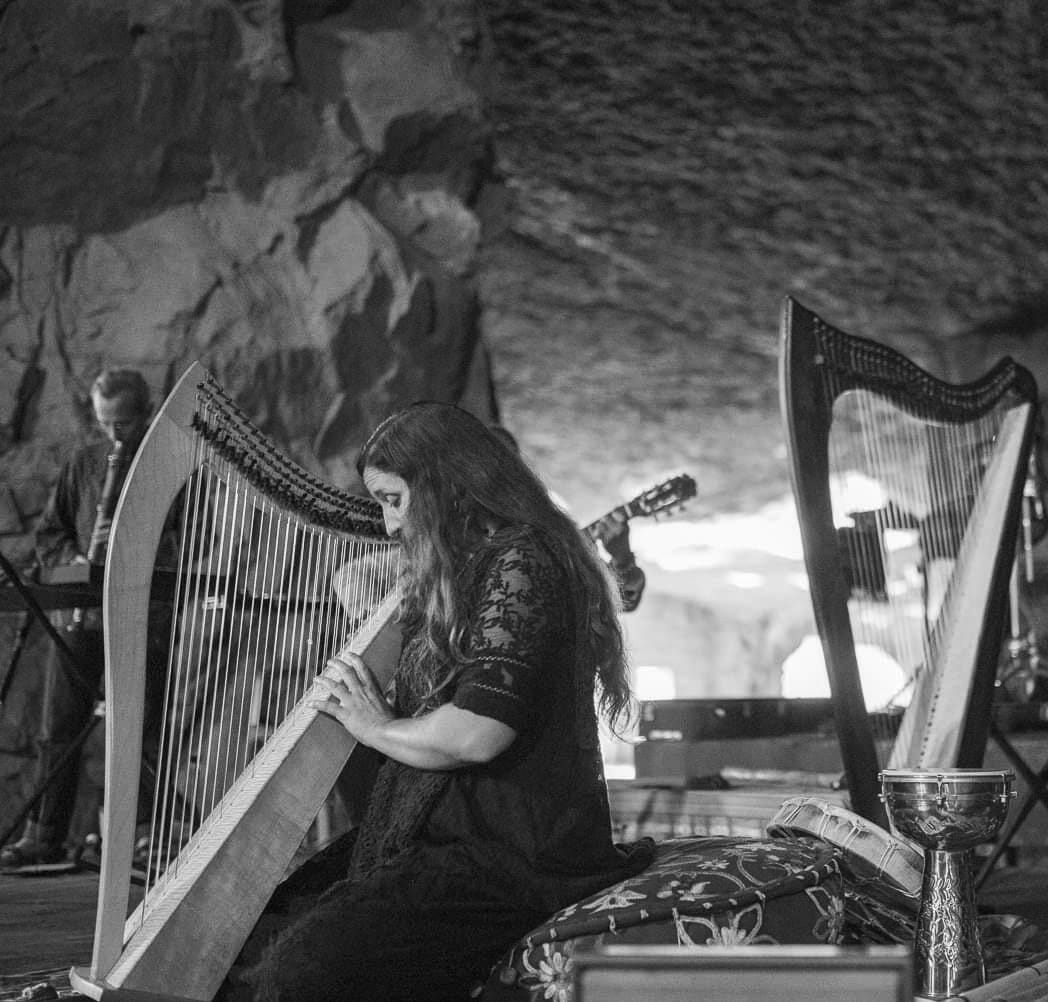 Created over the past four years by world and sacred music composer often known as Mamalama, Elizabeth Clark’s Earth Opera shows stories of rebirth and hope in a post-apocalyptic atmosphere. She says, “The theme centers on finding light and beauty in the darkest times, leaning into how connected we all are to each other–and to every living thing.”

The immersive theater piece was a hit when it premiered in August to nearly 500 people at Rosendale’s Widow Jane Mine.

“Seeds Under Nuclear Winter” was celebrated by many Hudson Valley artists who attended the performances:

Noted author, playwright/director, and poet IONE, creative partner/spouse of composer Pauline Oliveros writes: “A gifted harpist and vocalist, Elizabeth has created a rich, mythic tableau that brings forth potent musical stories, revealing the needs and longings of an entire community.” Woodstock-area Renaissance man (musician, archivist, writer) Robert Burke Warren said the show was “Breathtaking… Truly transcendent, moving, like a very intense dream from which I did not wish to awaken. It put me directly in touch with that part of me: the dreaming part, the deeper, truer part.”

Using world and modern sacred music, “Seeds Under Nuclear Winter” offers sounds and visions of otherworldly realms that unfold in a non-linear and timeless path similar to the way we dream. Ms. Clark’s Earth Opera combines an immersive experience from many creative disciplines including music, performance art, and movement, as well as experiments with light and audience interaction.

Elizabeth Clark is a composer, harpist, pianist, vocalist, poet, performing artist, and humanitarian, native to the Hudson Valley region. Her ever-evolving sacred and world music project is called “Mamalama” and manifests itself with interdisciplinary art forms in performance. “I see my exploration of music as a form of sung prayer and a way of healing,” she says.

She has performed a variety of solo and group performances and special presentations at many theaters, festivals, retreat centers, listening rooms, and sanctuaries throughout the Northeast including The Omega Institute, Chapel of Sacred Mirrors, Kripalu Center for Yoga, Deep Listening Space Dream Festival, Bearsville Theater, The Colony, Levon Helm Studios (with Elizabeth Mitchell and Friends), at the United Nations, and others. She has spent many years offering live harp/vocal music at the bedside for those on hospice care. Elizabeth is also a composer/songwriter with the Hudson Valley non-profit organization Sagearts, collaborating on many original, life-reflective songs with local elders. Her work is part of the 2022 documentary PBS Special “We Remember: Songs of Survivors.”