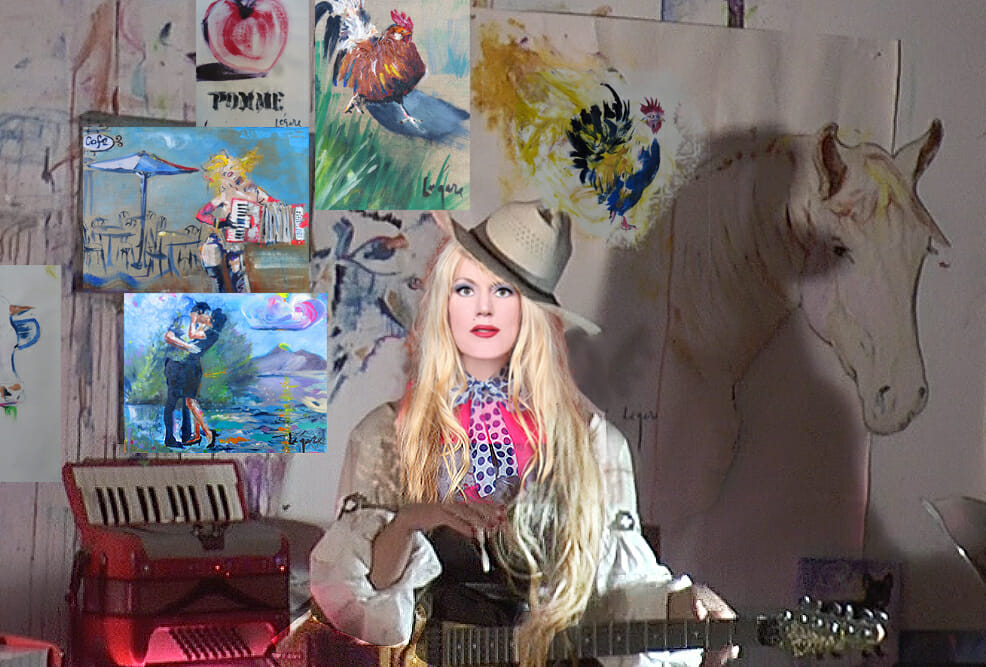 “A charismatic showman who works the audience with the razor edged skill of a
veteran comic poking, teasing, and caressing it with clever turns of phrase both
musical and verbal…She plays the piano with enormous authority in a style that
encompasses Chopin, blues, ragtime, bebop and beyond, and she brings to her vocal
delivery a four and a half octave range, and an extraordinary palette of tonal color and
meticulous phrasing. ”
– New York Times

“Gorgeous, blonde bombshell with a dynamite body, a magnificent voice, a wild sense of humor…(She is) an extremely intelligent Vassar graduate who can play four or five instruments and challenge every premise you might have about her as she zips through her set – her song selections are impeccably chosen. (She has) a dazzling voice – a superb singer miles above most of the jazz stars of today …a comic mind…She turns excess and extravagance into an art form and anchors it with stunning simplicity.”
-New York Post

“Phoebe Legere is one of the most, inspired and talented,creative-supernovas on the planet…One of those rare luminous souls… beautiful, wickedly funny, anointed with wisdom, and her music possesses Native American mystical and healing qualities. like Billie Holiday or Jimi Hendrix or Miles Davis or Sun Ra…”
-Dimitri Monroe, Hits Magazine

“Legere is an expressive and versatile singer whose voice ranges from a dark and earthy alto to a gorgeous dazzling high soprano…. she combines intelligent lyrics and a fusion of French musette, Cajun, pop, rock and jazz into a stew she calls, “roots alternative.”-
-John Pitcher, Washington Post

“Musically Phoebe is as tremendous at the grand piano as she is on guitar and accordion…Her voice is rich and warm, she draws her audience in…We feel as if we getto know her quickly, ending the evening as firm fans if not friends…”
-Sydney Morning Herald

“Legere restores, resists, deflects and reflects the caricature of women. With a gorgeous body, and enormous wit, she easily absorbs you into her unique brand
of transcendence…. she is royalty in the clubs of Downtown NYC. ”
-Lynne Lynn, Downtown Magazine

“Check out Phoebe Legere – she doesn’t so much sing a song as inhabit it…. with a pure, remarkable four and a half-octave range…”
-New York Daily News

“She is arresting… we like Phoebe”
-The New Yorker

“Phoebe Legere, a name to conjure with…. She is an American
original, she’s fun, she’s funny, she’s smart, She’s a beauty, almost
like a Carole Lombard, but the main thing about her is SHE’S GOOD” –
-Studs Terkel, National Public Radio

“Like Marylou Williams, she can maintain a rollicking left hand that
segues easily from stride to boogie-woogie while tickling the piano’s upper register into sublime submission. Similarities to Jerry Lee Lewis are probably not
impertinent either…”
-New York Times

Sitting down at the grand piano Legere launched into a hard driving incredible boogie
woogie…Phoebe Legere is a talent to be reckoned with…a sharp wit permeates her lyrics…Vocally Legere possesses a powerful, precise 4 octave voice that is equally at home in the operatic style as it is singing lowdown blues…In two hours Phoebe Legere not only won a raft of new fans in Saratoga, she also demonstrated that talent, intelligence and sex appeal need not be mutually exclusive. Beyond the obvious attributes, it’s Legere’s warmth and exuberance that will prompt us to watch for her return.”
-Linda Ellingsworth, Saratoga Chronicle

“Phoebe Legere’s latest recording is an incisive critique of the role
of contemporary culture in America in the form of a post modern,
urban opera. A dazzling, dizzying sound collage of sampled
soundtracks, spoken word, composed melodies, sound effects, raps,
electrobeats, and vocal and keyboard improvisations, it’s a shimmering
soundscape of a night spent downtown with Legere as tour guide…A tribute as much to the composer/vocalist/keyboardist’s virtuosic talent as to her keen wit and intelligence, “Blue Curtain” surprises, shocks and entertains at every jagged turn. Simply put, it’s as important a piece of music as you’re likely to hear all year, or any year”
-Seth Rogovoy, The Berkshire Eagle

“Her beautiful voice, with its dazzling range and rich tones…. can
take your breath away… she runs the gamut of music like a Marx
brother crossing to stage left…”, She’s solidly based in her art and
is a superb musician. ”
-New York Post

“The sexiest accordionist on the planet…”
-TimeOut NY

“Phoebe Legere’s brand of articulate genius will have it’s day – the
time is ripe for a legitimate, American original who has it all –
beauty, brains, talent, sex appeal, and a giving heart… A brilliant
songwriter..”
-Where Magazine

“There is a point where Phoebe is singing a beautiful song she wrote for and about her mother and, near the end, she breaks into what (I think) is a traditional Native American spiritual call (part of Phoebe’s ancestry is Penobscot) that brought chills. An extraordinary moment.

People who come across Ms. Legere’s oeuvre for the first time often think “It’s Marilyn Monroe meets Edith Piaf meets Dorothy Parker.” (And, oh yeah, she’s a magnificent painter as well.) But Phoebe Legere is much, much more than this.”
-Boston Phoenix