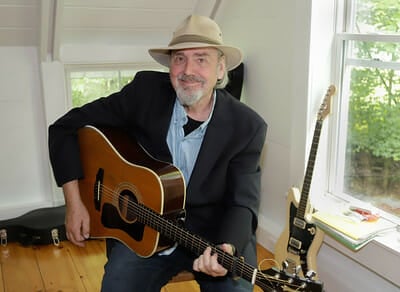 Michael Veitch can’t help but to look at music from all sides. This year–the same year that he’ll be appearing on PBS’s upcoming series about songwriters co-writing with Holocaust survivors, he will release an album with the title, “Wachtraum,” which means “days of dreams” in German. “Wachtraum”’s theme focuses on his writing and beautiful tenor voice’s reflections on unique qualities of each month.

Highlights include “First Day” of a new year, and “Valentine’s Day,” about love which helps coldness melt away. It’s a co-write with his long time recording engineer Julie Last. April Fools” is topical and personal and co-written with Judy Kass; it deals with delusional thinking. “Happy Fourth of July” recalls leaders and peace activists we’ve lost since the 1960s and features Dan Whitley playing brother Chris’s guitar. “August Nights” is inspired by the Beach Boys—but is really The Veitch Boys! “Wachtraum” ends with the holy days of December with “One Wish” a duet with ethereal singer-songwriter Kirsti Gholsen.

Michael’s been thankful on how the folk community has helped him through the years. “They’ve helped kept me going as a writer and performer,” he says. Judy Collins covered his song “Veteran’s Day,” on her “Temple of “Dendur Live” DVD and Bohemian CD. She said, “ Veterans Day is one of the best songs I ever recorded,” Michael’s song “Pledging Allegiance,” which reached #10 on the 2017 Folk/Americana charts, was honored by Music2Life Foundation. He’s a regular at festivals, notably the 2001 Newport Folk Festival.

Since the 1980s, when Michael was a regular in the Greenwich Village music scene, he’s had an angel by the name of Shawn Colvin, mentoring him along in his musical career. She brought Michael to the Village to “learn songwriting from Jack Hardy, who was regarded as a songwriting leader in the scene.

In the 1990s, after Michael (who earned a Community Action degree from New York’s SUNY Empire) lost the race for Vermont’s U.S. Senator, he opened for Shawn Colvin, and shared stages with many fabulous singer-songwriters.” Then White House Communications Director George Stephanopolis heard Michael perform, and invited Shawn and him to meet President Clinton in the Oval Office. A who’s who of Michael’s folk heroes—including Jackson Browne, Richard Thompson, Lucinda Williams, David Crosby, Leo Kotke–came to Shawn’s shows. “I hope their genius rubbed off on me,” smiles Michael. “It was both inspiring and a thrill for Shawn to introduce me to them.”

Shawn sang on Michael’s first album, “New York Journal” on a song called “Anybody But You,” released in 2000. About that same time Michael moved to Woodstock, NY, and recorded and intensified his songwriting reputation. .”

Now he’s releasing his eleventh album, “Wachtraum,” and involving himself with unique projects geared to use music for empowering purposes. One of them was songwriting with Holocaust survivors to help express their emotions. That series, “We Remember-Songs from Survivors” will be broadcast on PBS this spring, 2022.