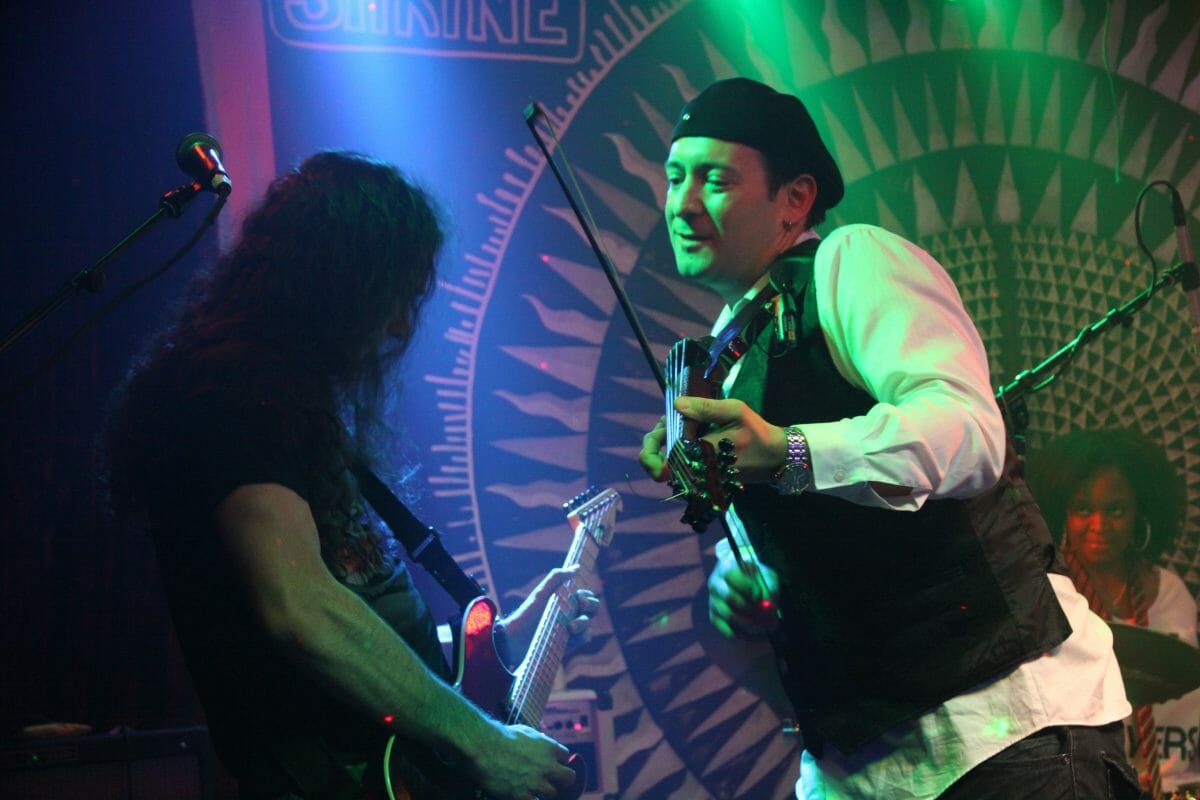 “As at home in the world of Grappelli and O’Conner as he is in the world of Steve Vai and Jimi Hendrix, Joe Deninzon may very well be our next national violin treasure!!”
-Jedd Beaudoin, Sea of Tranquility

Joe Deninzon has been hailed by critics as “The Jimi Hendrix of the Violin,” because of his innovative style on the “Viper” electric seven-string electric violin. Joe has worked with Sheryl Crow, Bruce Springsteen, Phoebe Snow, Everclear, Ritchie Blackmore, Alex Skolnick, Smokey Robinson, Les Paul, Peter Criss from KISS, Renaissance, and as a soloist with Jazz at Lincoln Center and the New York City Ballet.

Joe is the lead singer and violinist for the progressive rock band, Stratospheerius (www.stratospheerius.com), with their fifth CD, GUILTY OF INNOCENCE on Melodic Revolution Records. He can be heard on over a hundred CDs and jingles as a violinist and string arranger. A BMI Jazz Composer’s Grant recipient and winner of the John Lennon Songwriting Contest, he has written a solo piece for violinist Rachel Barton Pine, and in 2015, premiered his “Concerto for Electric Violin and Orchestra” with the Muncie Symphony Orchestra.

Joe is a member of the Sweet Plantain String Quartet (www.sweetplantain.com), which combines Latin Jazz with hip-hop and Classical music, and has toured throughout Europe and the U.S. Joe has also released a CD with his Acoustic Jazz Trio, titled “Exuberance.”
As an educator, Joe has taught at Mark O’Connor’s String Camp and Mark Wood’s Rock Orchestra Camp, and makes annual appearances performing at the Grand Canyon Music Festival with renowned harmonica virtuoso Robert Bonfiglio. In 2006, Joe co-founded the Grand Canyon School of Rock, an annual music program for local high school students. He regularly travels as a clinician and has contributed articles to Strings, Downbeat, American String Teachers Journal, and Making Music Magazine. In 2012, Joe wrote a book on electric violin techniques for Mel Bay Publications, titled “Plugging In.” Joe has made the Downbeat Critic’s poll for “rising stars” in jazz/rock violin. Chris Haigh’s book, “Discovering Rock Violin,” lists one of Joe’s recorded solos among the “Top 20 greatest rock violin solos of all time.”

Joe holds Bachelor’s degrees in Violin Performance and Jazz Violin from Indiana University and a Master’s in Jazz/Commercial violin from Manhattan School of Music.