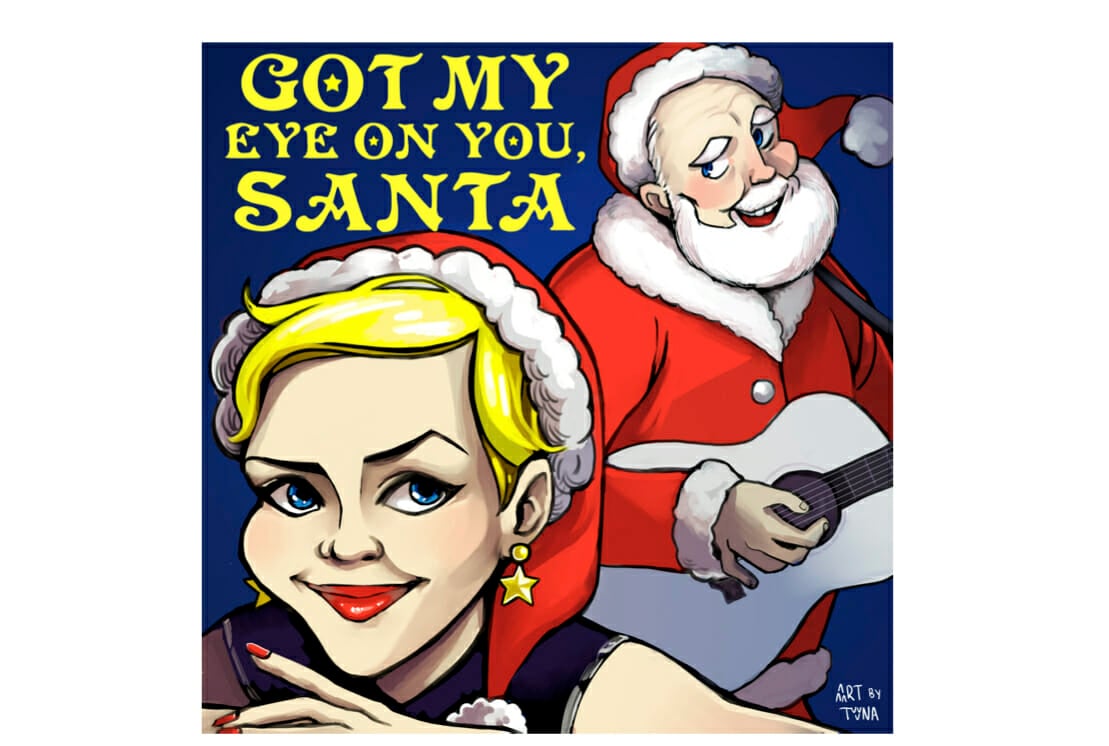 This is “Got My Eye On You, Santa,” with lead singer Jody Quine from Vancouver, Canada, and Dan Berggren from Ballston Spa, NY as “The Big Mr. C” (aka “Santa Claus!”). The song’s producer/songwriter Anne Leighton noticed Jody’s joyful Internet presence on Social Media, and her optimistic and simple take on Pat Benatar’s hit “We Belong To the Night.” “I heard a combination of Shirley Alston Reeves’s relaxed flirt from the Shirelles (“Will You Still Love Me Tomorrow”) and the tone of the singer from the We Five (Beverly Bivens) hit: “You Were On My Mind” in her voice,” Anne says. “It was a relaxed and engaging alto. Seductive and loving.” (This year Jody appears on the New Age album: SLEEP THIEF MUSIC.)

A versatile bass singer who can do impressions of anyone from Bob Dylan to Barry White, Dan is also a great listener, including being sensitive to the needs of audio production. He was the college radio teacher of the song’s writer and producer Anne Leighton, who says, “Dan taught his students to make every aspect of their radio productions captivating, and to think about audio elements that move the listener along as he or she listens to a radio spot or a song!”

In addition to singing on “Santa,” Dan has a great music career as a folk singer, and his latest album is  This Planet We Call Home. Dan learned his radio craft in the military when he served with the American Forces Network, Europe as a radio producer, writer and announcer.  He is a 43 year folk music veteran, and owner of Sleeping Giant Records which has produced 15 albums.

“Got My Eye On You, Santa” is an upbeat song (with a shuffle beat), and is in the same family of pop music as Meghan Trainor “About the Bass,” The Waitresses’ “I Know What Boys Like,” and Katrina & the Waves’ “Walking On Sunshine.”

“Got My Eye on You, Santa” was created in the magical workshops of Jody, Dan, and two New Jersey recordings, one owned by Bendeth, and the other by Chris Sulit, who engineered Santa’s instrumental work by jazz great Roberta Piket’s keyboards (Hammond B3, a Steinway, and Fender Rhodes) and the drums and bells, performed by NYC punk rocker Mick Oakleaf.

The song GOT MY EYE ON YOU, SANTA was written by Anne Leighton, music director/songwriter Roberta Piket, and songwriter Priscilla Harriett.

On the strength of this song, in 2018, Anne was offered a songwriting contract with South Africa’s Sheer Publishing, who also have the legendary song “The Lion Sleeps Tonight” under their umbrella of fine South African music.

GOT MY EYE ON YOU SANTA
written by Anne Leighton, Priscilla Harriett, Roberta Piket

I’ll be waiting by the chimney with homemade cookies
and a smile that is sparkling so white
Santa Santa, you make me happy