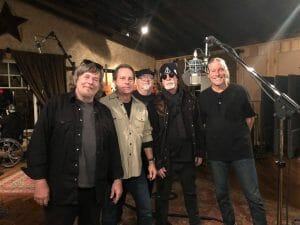 Very few legendary rock groups boasting a string of 1970s’ hits contain three original members over four decades later. Even fewer have a new album that vividly captures the sound and power of their best-known classics. Firefall has both. That’s reason for serious celebration from their loyal fans.

Known for their chart-topping singles “You Are The Woman,” “Just Remember I Love You,” and “Strange Way,” Jock says the group “wanted to make sure that at least half of the record, or three or four songs for sure, sounded like Firefall from the ‘70s–acoustic-based vocal songs.”

One of the obstacles was group members lived in five different states, so when there were gigs in Colorado or Nashville, they’d stay at Jock’s or Gary’s home studios, respectively.

Conquering those logistical roadblocks was worth all the effort. The rocking opener “Way Back When,” one of four tracks that Bartley wrote or co-wrote, pays tribute to the classic musical era that inspired Firefall. “The first verse and first chorus is set in 1965. The second verse and chorus is ‘67, and the third verse and chorus is 1969,” says Bartley. “The first verse is the Beatles, the Stones, the Byrds and Bob Dylan. And two later verses are of Aretha Franklin, the Rascals, Van Morrison, CCR, CSN, Led Zeppelin and other groups that had music out then. The lyrics are about looking back and remembering how the ‘60s were so vibrant and had such great music. We thought it would never end.” Other songs he wrote are “There She Is,” a positive love song, “Before I Met You,” and “A New Mexico,” with guest vocalist Mark Trippensee; it’s a belated followup to the band’s classic “Mexico” from their eponymous 1976 debut album.

Jones, who’s been in the band for five years, penned the powerful “Never Be The Same.” “It’s a heartfelt song about his mother passing away.” “Hardest Chain” was co-penned with Ficca and Colorado songwriter Tony Rosario; “That’s another one in a modern, kind of different way, but it sounds a lot like Firefall because of minor-chords and darker tone,” notes Jock. Nashville country songsmith Gary Burr was responsible for the wry “Younger.” “Ghost Town” is a Tony Joe White original from the 1970s “that David Muse brought to us,” says Jock. The late Virginia rocker Robbin Thompson, a longtime friend of Firefall, scribed “A Real Fine Day,” given an uplifting lead vocal by Jones.

Bassist Mark Andes fronts a rousing remake of Spirit’s immortal “Nature’s Way,” paying tribute to the days when he was in Spirit in the late 1960s/early ‘70s. Timothy B. Schmit and the Doobies’ John McFee sing and play on the song. “We’ve been playing the song ‘Nature’s Way’ live a lot and getting great response from our fans who love Spirit,” says Jock. “

The album cover pictures the Comet Neowise, which lit up the Western U.S. nighttime July 2020. That image is reminiscent of the striking comet artwork on the band’s first album, which Jock helped design.

“The name Firefall comes from Yosemite National Park, where for over 100 years, they light a bonfire off on top of a cliff and slowly push it over. And they say, ‘Let the fire fall!’ It was this big tourist attraction,” explains Bartley.

Firefall came together in Boulder, Colorado in 1974. When he played lead guitar with Gram Parsons and the Fallen Angels, Bartley crossed paths with Roberts a short time earlier in New York City; both discovered the other lived in Boulder, Colorado, and began rehearsing together. Then Andes joined, and –along with original members Larry Burnett and the Byrds’ Michael Clarke, they went to New York City, and shopped a demo tape that Atlantic loved, and signed. Then they hired a 6th member, David Muse. The hits, started in 1976 with ‘You Are The Woman,” “Just Remember I Love You” and “Strange Way.”

“Boulder, Colorado became this hotbed for music, and Firefall was one of the shining light out of that,” says Jock. “A lot of people have called Firefall ‘the Colorado Sound.’” Now COMET is poised to rocket into the cosmos, the latest chapter in Firefall’s amazing saga.