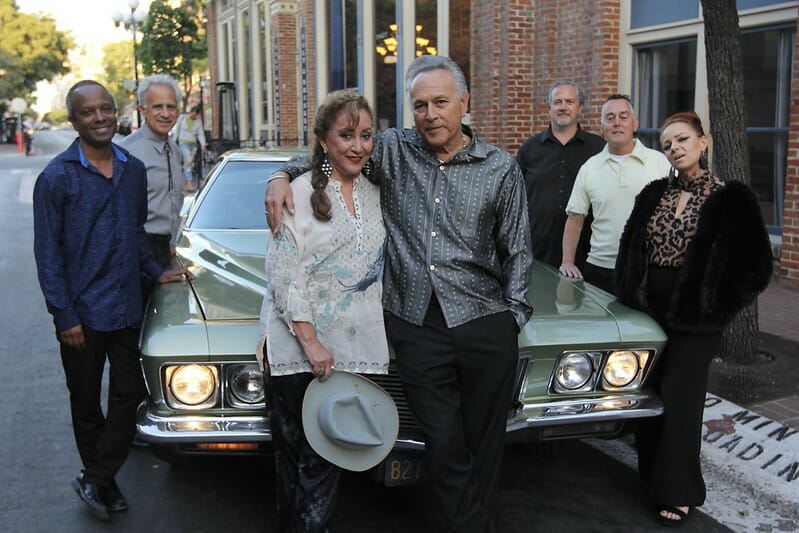 Blue Largo is on a mission to bring love and harmony back into our world. For the Americana Soul band’s new album “Got To Believe,” founder/guitarist Eric Lieberman wrote the song “A World Without Soul,” which is also the band’s music video, as his personal lament that the arts—especially music—has taken a distant second place to consumerism and the latest technology. Other songs on the album tend to life’s major issues about love, loss, confronting challenges and ultimately prevailing through the hard times.

When Blue Largo was formed in 2000, they played 1940s and ‘50s blues covers by Billie Holiday, Dinah Washington, Louis Jordan and T Bone Walker. Prior to that, going all the way back to 1982, Eric was a renowned blues guitar player on the Southern California blues scene, which is when he first met Alicia Aragon at San Diego’s Mandolin Wind. He performed there every weekend, while she waitressed. She always loved to sing and had a great voice, but never desired to perform professionally!

It took until 1999 for her to finally say “yes!” to starting a band with Eric, and that is how Blue Largo was born. Named after an obscure Bill Doggett instrumental, Blue Largo released two albums of vintage blues covers: 2001’s WHAT A DAY (produced by Mavis Staples’ bandleader Rick Holmstrom) and 2002’s STILL IN LOVE WITH YOU. Then, in 2006 Eric was diagnosed with a neurological condition known as Focal Dystonia. Though the malady severely affected the coordination in his right hand, Eric said “no” to the potential end of his guitar playing. For the next 15 years, he spent five hours a day, following a strict regimen to create new neurotransmitters with activities that included learning brail and formal piano lessons, which he hoped would eventually replace the damaged ones and thereby help him regain some of this lost coordination. Now he’s about 95% better, playing close to his peak years, especially when using a thumb pick as opposed to a flat pick.

By 2015, Eric felt confident enough to record again, and he and Alicia started thinking seriously about making a new album. Blown away by a Bonnie Raitt show he recently saw, especially her complete originality in spite of her respect for traditional blues, he came home and wrote“Sing Your Own Song,” the title cut for the group’s 2015 album. He ended up writing seven more original songs for this album, and wrote eleven more for the group’s next outing “BEFORE THE DEVIL STEALS YOUR SOUL,” which was nominated for The San Diego Music Awards’ “Best Blues Album” In 2018.

◦ In September 2021, Eric learned that one of his major life long inspirations, Steven Van Zandt, was scheduled to do a book signing for his memoir, “Unrequited Infatuations” in Los Angeles. A few years earlier Eric had written a reggae salute, “Disciple of Soul” about the musician/humanitarian/radio programmer/memoirist; And now, hoping to have a chance to share the song with Little Steven at his book signing, Eric was inspired to get back into the studio. Six months later he had an entire new album under his belt.

GOT TO BELIEVE has ten original songs, plus a cover of Nina Simone’s “Don’t Let Me Be Misunderstood.” Eric wrote the ballad “Soul Meeting” for Alicia. The walking blues and horn-laden “What We Gotta Do” is about why musicians do what they do. “Soldier In The Army of Love” is dedicated to the people of Ukraine. “Ronnie,” is about the special friendship between Blue Largo’s piano player, Taryn Donath and the late San Diego musician Ronnie “Night Train” Lane, a larger-than-life Texas style bluesman, in a perennial cowboy hat and snakeskin boots.
“Gospel Music” is about the incredible power of that music. The melancholy “Rear View Mirror” was written when Eric thought, “there’s so much in the rear view mirror, and maybe not so much in the headlights.” He wrote the full blown country song “Santa Fe Bound,” for a dear friend who passed away in 2019; it features pedal steel guitar virtuoso Dave Berzansky (Hacienda, Bastard Sons of Johnny Cash).

Radio promoter David Avery, of Powderfinger Promotions says “GOT TO BELIEVE” is a “powerhouse of various roots styles!” It ranges from vintage soul to Americana, reggae and country, and still it all seems to flow seamlessly. Moreover, songs’ messages of love, hope and unity are most certainly something the world can very much use right now.